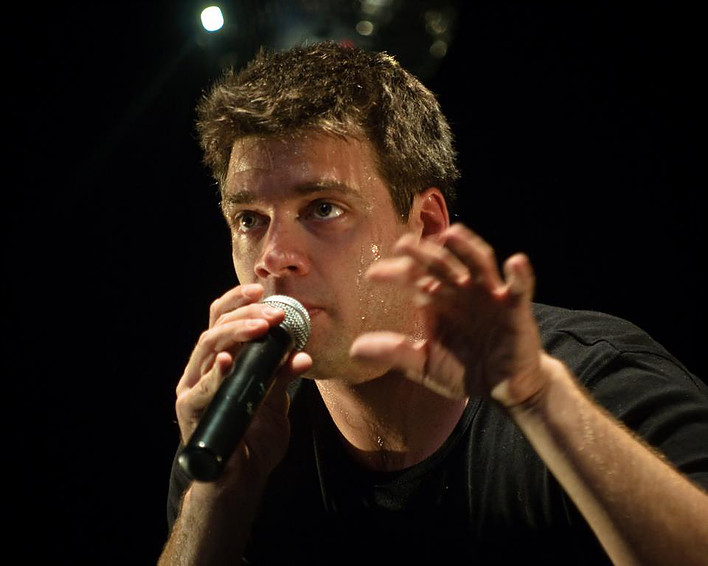 Artistic and educational path :
Juggler, acrobatic carrier, slammer, beatboxer and performer, Gaspard Herblot oscillates between Hip Hop culture, theater and circus arts. Alongside various trainings (Singing Academy, schools of physical theater) and trained as a musician intervenant in rhythmic pedagogy and vocal techniques at the Dalcroze Institute, he has developped a rigorous self-taught practice of mouth percussion and vocal gymnastics.

Nourished by the regular practice of yoga, circus (diabolo, devil stick and acrobatics) as well as pilates methods and Feldenkreis, Gaspard develops a very physical approach of expression.

He is also playing in the show « Alex au Pays des Poubelles » (Alex in the Garbage Land) by Maria Clara Villa Lobos as well as in « Je suis libre ! Hurle le ver luisant » (I am free ! Howls the shining worm) by Jean-Michel Frère.

Moreover, he affirms his personal universe in the show « Pièces Détachées » (Spare Parts) wich combine circus numbers in live sound, pieces of beatboxing, slams and songs. The show was created in 2010 and is produced by « La Générale d’Imaginaire » (Around 150 performances between 2010 and 2015). In 2015, Gaspard Herblot founded is own company in his name, that will be renamed the « AirBlow Company » in 2018.

Gaspard diligently practices poetry and song writing since he is 12. He then develops a very rich personal repertoire of slam and rap just as he writes the texts of many creations and runs writing workshops for all kind of audience since about fifteen years.

He wrote the texts of the shows « No Way Back », « Je suis libre ! Hurle le ver luisant » (I am free ! Howls the shining worm) by Jean-Michel Frère and the Theatre of the Zygomars. He also wrote his own shows « Pièces Détachées » (Spare Parts ) and « Possédés ! » (Possessed) and wrote for the show « Francophonica » by the company « Les Daltoniens ».

Trained in modern letters, communication and cultural mediation (specialized in performing Arts), he has thus developped an original writing pedagogy that has evolved through many courses.

Rhythm and voice side :

Human beatboxer and vocalist with multiple and varied influences, his pedagogy crosses the physical approach of Dalcroze and the creative process of Lecoq (emeritus pedagogue of physical theater) applied to the imaginary sound.

Trained in the Dalcroze Institute as a vocalist and rhythmist, he follows many courses with Sylvie Storm around the voice. He also explores the crosstalk technique that he has been diligently practicing since about fifteen years, following a course with Nestor Kornblum (Association Healing with Sound). He approaches sound healing, therapeutic work and energetics through sound and rhythms. In addition to that learning, he also follows many courses around the taketina method.

Gaspard has also followed the training for rhythmic teacher of Arnould Massard (rythme.be). He regularly attends many meetings around body percussions and human beatbox in order to continue to acquire technique and follow the evolution of these disciplines.

Nourished by all these influences and pedagogical experiences, he proposes now a unique pedagogy around body music (body drumming, human beatbox, circle songs…) wich comes in different formats for different audiences around musical creation with the body as a unique instrument.

Educated about all his experiences, he develops different training programs around circus, writing (slam and rap) and body music.

Gaspard proposes different training combining body music and writing and supervises the group until the performance by also working on scenic presence and theatricality. He has intervened in school on many occasions for initation workshops or participatory projects leading to the representation of a show (many interventions in middle and high school).

He intervenes for many institutions such as « Pierre de Lune » (Specialized association in artistic intervention in schools), « La Générale d’Imaginaire » in Lille, « L’ara » in Roubaix and the « Cité de la Musique » in Paris.

He also intervened in jail and, in 2018-2019, he officiates at the Psychiatric Hospital of Beau Vallon where he trained the animators of artistic workshops before he directly intervened towards patients in order to set up a show combining sound poetry and body music.

Artist in residence at the conservatoire of Loos from september 2014 to June 2015, Gaspard follows a training for teachers and the artistic coordination of a project combining the voice, body and vocal percussions presented in june 2015. Also artist in residence for the 2016-2017 season, he worked with music facilitators around beatbox and body drumming pedagogy and follows up many school projects.

He regularly trains the music facilitators in body and vocal percussions (CFMI of Lyon, « IUFM » of Lille, the « ARA » of Roubaix, « PREAC » in Nord-Pas-de-Calais, « DAFOP », music schools and « remua.be », « Les Jeunesses Musicales » of Belgium…). He is also teaching at the Marchiennes au pont Academy and at the Circus School of Brussels.

Having evolved in the music, circus and theatrical areas, he proposes different courses for performing arts practitioners. Since about fifteen years, he intervenes in the « Espace Catastrophe » of Brussels with different modules around juggling, rhythmn, sound effects and human beatbox.

He has already intervened for : the Circus School of Brussels, « Cirqu’Conflex » (Social circus), the « LABO » (School of physical theater), « Remua.be », the « AKDT » and other institutions such as the Monnaie Opera, the « MCCS » of Molenbeek and other different schools. He also did in other structures such as « La Chaufferie » in Grenoble, The « Générale d’Imaginaire » company of Lille, the « Saltimbanque» company in Luxembourg, as part of the « Ouaga Hip Hop festival », for the PHARE Circus School of Cambodia, for the national drama center « Pierre de Lune » just as for the Superstrat Association and as part as the « Ruches Théâtre » organized by the Unity Theater.

7. Coaching and support to creation :

Gaspard is regularly requested for creation support by choirs or for circus, dance and theatrical shows on different axes such as composition or coaching in sound effects, body music and writing. He participated in vocal coaching on the last show of Carina Bonan « Les Puissants ! »  and on the Foucauld Falguerolles and Maxime Dautremont’s « One Shot » by the One Shot Company. He worked on the writing and composition of a body percussion piece for hand on table for the « Dis Moi Oui ! » Company and assisted the circus « El Grito » and the « O quel dommage » Company on the show « Les Pleureuses ! ».

He also worked with the Circus School of Gembloux to transmit and choregraph sets of body percussions in motion. In 2009, he assisted the « Afrique Slam Collective » on the set up of singing and beatboxing support during a residency in Ouagadougou, as part of the « Ouaga Hip Hop Festival » in Burkina Faso. He also followed the « Saltimbanque Company » in Luxembourg and the PHARE Circus in Cambodia.

He coordinated many artistic and musical projects of participative creation mobilizing around fifty contributors (various audience : middle school students, disabled, semi-professionals…) as the opening act of the « Barbatuques » in november 2013 as part of « Dunkerque 2013 ».

In 2016 and 2018, he cooperates with the National Orchestra of Belgium and Sarah from « Remua.be » around a participative concert during wich he will have the opportunity to play with this prestigious musical ensemble.